Below:  Our backyard pool. 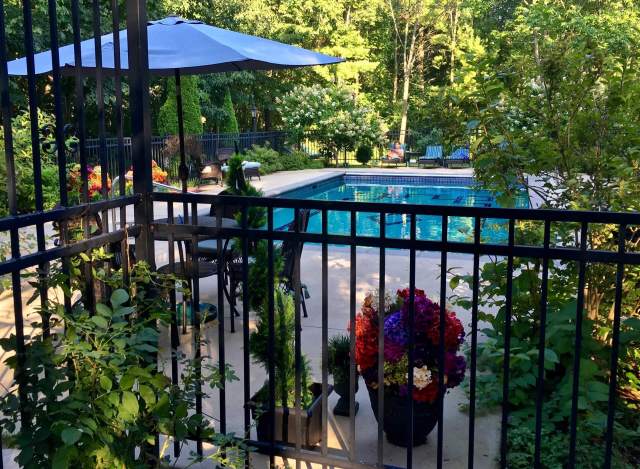 I was talking by phone to my elderly parents. I’d already goofed up the talking to them part, by accidentally hitting the line button on my portable land line phone when I placed it near me so that I wouldn’t miss their call returning my call to them to chat. They apparently tried for 1/2 an hour and got a busy signal the whole time! So when I realized my mistake and called to apologize, I suggested talking on Monday instead.

They hesitated a brief moment before telling me that might not work because they’d be busy watching the eclipse. “Wait…that’s tomorrow I asked?” “Yup” they said. “Wow…I’ve got to figure out how I’ll watch it then,” I told them. They asked me if we’d purchased eclipse glasses. We hadn’t, and frankly I’d never even heard of them before! But it turns out that my husband had heard of them…although why he’d failed to mention it to me is a bit of a mystery! But he’d even tried somewhat aggressively to get some a day or two earlier. Sadly, every vendor that was close to us was completely sold out. Even Amazon was sold out!  So, he’d decided that he’d try using his welding helmet instead.

Monday morning arrived and I was determined to figure out a way. First off I learned  that most welding helmets really wouldn’t work after all, because most of them don’t use they extra dark filter required. A pinhole camera just didn’t interest me since I’d been there and done that during some past eclipse. But I’d seen one news story online in which a newscaster had mentioned that by just taking a very large sheet of white paper outside and laying it on the ground, it might yield positive results for viewing the eclipse…and that gave me hope!

The newscaster said that as the sun moved behind the moon, its image could end up being reflected onto the paper, in a way that somewhat resembled waves. The approach was intriguing to me, so I headed down to the basement to find an old roll of white paper left over from when our kids were little and had an artist’s easel.

It was while I was still descending the basement stairs that a thought struck me. If white paper worked that way, then maybe a swimming pool would too? In fact, maybe a swimming pool would work even better?  So, I decided to skip the paper and headed out to our back yard pool…but I was running out of time. I didn’t even waste time looking at a clock but I knew that the eclipse would probably be peaking in our area in the next 5 minutes.

As I removed the pool cover I had both iPhones in my pocket. When I approached the pool I was surprised to see that the sun cast a perfect mirror image of itself on the water. In fact, it was so perfect, I worried that I might hurt my eyes just looking at it (it was really bright!) I worried because earlier in the day, I’d watched a video with 2 elderly guys talking about the time that they’d both dared each other to look directly at another eclipse long ago…I think maybe it was in 1924? That competition had ended up being really foolish because it ended up having lifelong ramifications for both of them in terms of blurred and poor vision. They’d burned their retinas! I still don’t know if you could burn your retina by just looking at the mirror image of the sun in a pools reflection…but I decided not to test fate. Even though I thought I still had a few minutes to wait, I decided to start shooting footage of the sun’s reflection now.

The worst that might happen I reasoned, was that my arm might get pretty tired as I tried to hold my phone really steady for a few minute’s time. Because I’d also failed to procure a tripod. So I dug into my pocket and pulled out my favorite ‘camera’ iPhone. After doing that I was stunned to see that in those few brief moments the sun had disappeared!

What happened next? You can see for yourself in my short (1 minute) video. I should warn you first though, that my recalling this story actually took longer than it will take you to view the video! I only managed to capture a part of the eclipse on film…but it’s still really cool!

Here’s my Short YouTube Video of the Solar Eclipse

If You Have Any Interest in Preplanning for the Next Total Solar Eclipse…Here’s a Great Website! 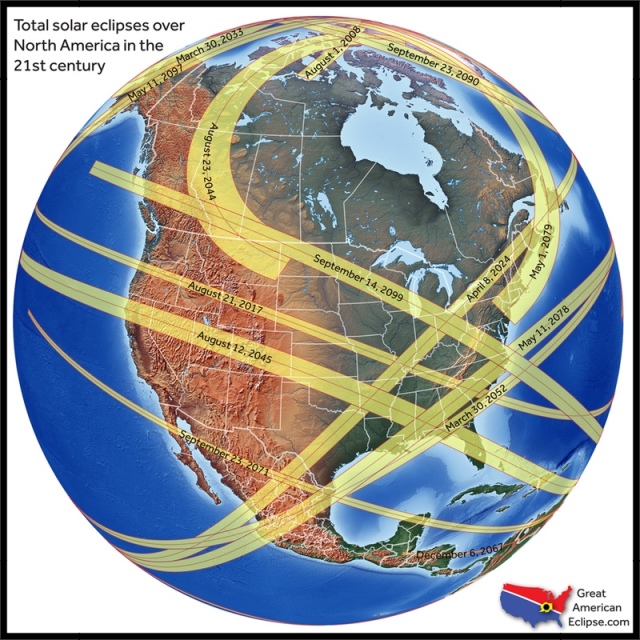 If you’d like to leave a comment, please do so by scrolling way down…past my bio, past the WordPress ads, and past Related Posts…to a little Comment box.

Hi...I'm the author of 2 main blogs on WordPress...vsatips...where I write tech tips for mobile devices...primarily ios...2nd is vsatrends...where I write less about tech things and more about everything else. I also host a YouTube channel which I use to better illustrate some of the 'how to's' in my posts. I love everything about technology. Currently, my main interests/platforms are ios, Windows and Amazon Echo. Recently I decided we were spending way too much money with our local cable provider. So I decided to cut the cord. There is a definite learning curve, especially the antennae part, but we successfully did that and are now saving a boatload of money, so I write some about that. I also am extremely conscientious about security because of an event my family endured , so I write a lot about that too. Two sub-categories of security I tend to focus on are the password manager Dashlane and Hardware Firewalls. Last, I take a lot of notes and have been a beta tester for Evernote for many years. I love Evernote! In recent years Apple has beefed up Apple Notes a lot...so it’s become a fairly serious note contender...as long as its OK if you lose or mess up all your Apple note data. I write about those 2 note platforms primarily.
View all posts by vsajewel →
This entry was posted in About me, YouTube and tagged August 21st solar eclipse, Shooting video of eclipse in a swimming pool, Unique way to see the eclipse, Video of solar eclipse. Bookmark the permalink.