The Problems Persist But At Least Now I Know Why

I, along with many of my Readers, continue to be frustrated by this really annoying problem! Oftentimes there are simply no visible controls or even hidden ones for that matter, that will allow you to toggle the video’s audio to on.

I’ve spent tons of time trying to figure out a consistent workaround for this…but there simply isn’t one. What I’ve uncovered instead is why this has become such a huge problem.

The reason is because in the fall of 2017 WebKit.org mandated new video policies for ios. The auto-play settings for videos were changed. Videos could be set to auto-play… but only without sound.

The only way that a specific website will display the proper controls for users to toggle audio on and off is if, when the video is added, everything is setup properly on the website to begin with. If it isn’t…then there’s a good chance that there won’t be any audio controls that will be available to users at all!

Here’s a decent explanation of the problem.

Given this knowledge, as well as the fact that the problem has persisted this long, coupled with the fact that Apple doesn’t appear to be addressing it…means that there’s only one additional suggestion I can add to those that follow in the paragraphs below.

When you encounter this problem, make sure that you let website owners know it exists and that when they include videos with no sound it’s really annoying for readers like you. Send them the link above so that they understand this problem is under their control…not yours. And ask them to fix the problem!

Read on for some ideas of how to solve the problem at various websites when they have taken the time to set things up properly.

Ever since I updated to ios 10 I’ve had intermittent problems playing videos using Safari. Sometimes if you tap on the video just right a ‘muted’ megaphone icon appears that you can ‘unmute’ by tapping on it (see the screenshot below.) Other times, as in the example of the video shown below, the ‘unmute’ option appears briefly when the video begins playing. But oftentimes that alternative isn’t available at all.

I don’t know why, but I always forget that there’s usually a simple solution to the problem, which is why I’ve written this post. 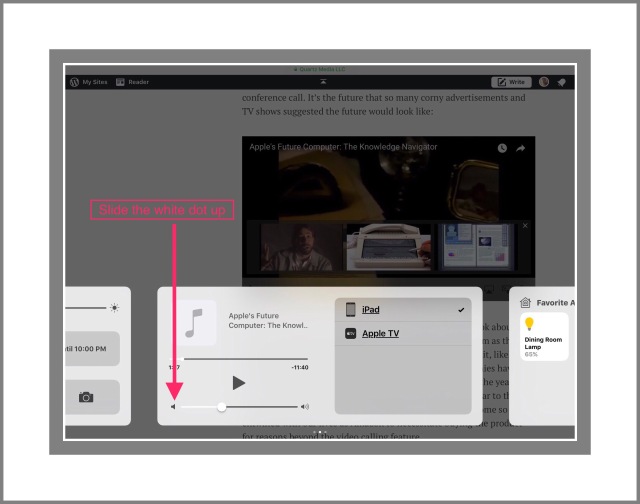 Just follow the Steps 1-4 labeled in green in the screenshot below. When you reach Step 4, long pressing anywhere on the YouTube link will cause the Menu shown in the #4 screenshot below to appear.

Hi...I'm the author of 2 main blogs on WordPress...vsatips...where I write tech tips for mobile devices...primarily ios...2nd is vsatrends...where I write less about tech things and more about everything else. I also host a YouTube channel which I use to better illustrate some of the 'how to's' in my posts. I love everything about technology. Currently, my main interests/platforms are ios, Windows and Amazon Echo. Recently I decided we were spending way too much money with our local cable provider. So I decided to cut the cord. There is a definite learning curve, especially the antennae part, but we successfully did that and are now saving a boatload of money, so I write some about that. I also am extremely conscientious about security because of an event my family endured , so I write a lot about that too. Two sub-categories of security I tend to focus on are the password manager Dashlane and Hardware Firewalls. Last, I take a lot of notes and have been a beta tester for Evernote for many years. I love Evernote! In recent years Apple has beefed up Apple Notes a lot...so it’s become a fairly serious note contender...as long as its OK if you lose or mess up all your Apple note data. I write about those 2 note platforms primarily.
View all posts by vsajewel →
This entry was posted in ios, iPad and tagged ios 10, ios 11, ios tip, iPad, iPad Pro, iPhone, Safari Problem, videos don't have sound ios. Bookmark the permalink.