Within the last year or two I’ve noticed one ios setting that keeps getting changed. It’s responsible for Photo Sync not working correctly.  It’s found under iCloud – Photos – Upload to Photostream. This needs to be enabled (green) for photos to sync. I’m not sure why but it seems whenever I do something device related like what I describe in this post to fix photo syncing…after a few days I notice that sync has stopped again. 3 devices in the last two days had this turned off when I checked settings. After turning it back on a few photos synced but not all of them. Resetting the device and then opening photos and dragging down the whole screen in album view to force a sync solved the problem.

Why I Wrote This

As many of my regular readers know, I’ve had countless problems keeping iCloud photos sync working. There might be extenuating circumstances because I use a ton of Apple devices and my photo library is massive. In addition to the almost 56,000 photos iCloud stores for me I also have upward of 2500 videos. I’ve gone to great lengths to keep sync working primarily because I do all may work on ios devices (despite the fact that iPads will never be the computer replacements Apple would like us all to believe!)  That’s why keeping sync working is absolutely mandatory for me! When it’s not working, trying to remember which device is able to access which images or videos is next to impossible. 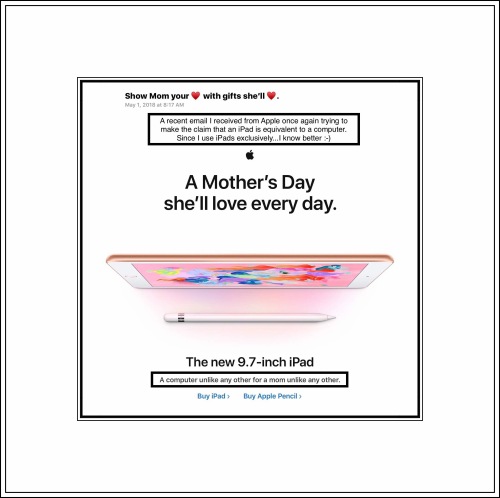 The Best Work Around for a Broken Photostream

When Photo sync stops working for me I spend a lot of time Air Dropping images and videos back and forth amongst devices. As a result I end up with a lot of duplicate images and videos...so this work-around is really annoying!

A much better alternative that can save me time too is when I remember to use iCloud photo sharing instead. It’s easy to orchestrate. I just create a Shared Album for that instance, then I upload whatever media I need to access from whichever devices  I can find it on.

This new Shared album is easily accessible on all my devices. However, I do still need to download the images or videos to whichever device I want to use to work with them. Therefore this method also results in duplicates which in turn increases the overall size of my iCloud Photo Library…so it’s important to remember to delete these shared albums once Photo syncing is fixed again.

A Senior Apple Support Specialist told me yesterday that the main reason any ios device loses photo syncing capabilities currently with the recent versions of ios 11, up to 11.3.3…is because the device was recently switched a different WiFi network.

And sure enough…I had done that! We’d arrived home from a quick ‘long weekend’ about 2 weeks prior. My iCloud photo sync problems, which had existed, but they’d been minor problems before the trip, grew much worse when got back home.

My problems grew so bad in fact that I finally gave up and called Apple Care. This was after spending a lot of time trying to remedy the problem on my own. My main attempt was one I tried repeatedly because it was my own proven solution up until now. This fix  had always been my most reliable solution. Although it seemed like with the advent of ios 11, while it tended to work initially, the fix didn’t seem to ‘stick’ for very long. Less often, it simply didn’t work at all. This was especially frustrating because I wrote a post about it, which initially received great feedback from family members and friends. That, along with my own reliance upon it is the reason I’m sharing it here. It may still work well for people using older devices or earlier versions of ios. 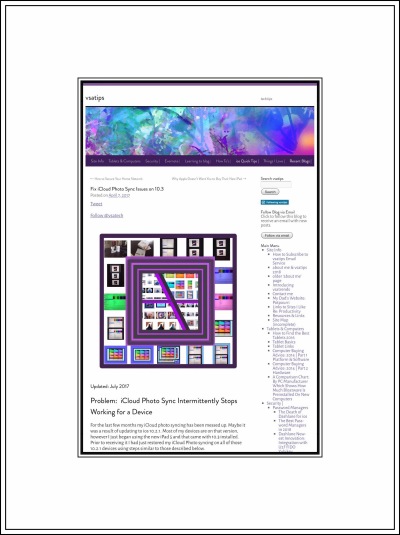 After repeated attempts which had short-lived success I ended up spending a lot of time researching the problem once again. But my search for new solutions online was uncharacteristically futile.

That’s when I decided to call Apple Care. About an hour after initially being screened by a general support person who tried their best but failed with simple advice like…“did you try turning on Photostream?” I was finally offered the opportunity to speak with someone more advanced. This initial screening is my main reason for always hesitating to call upon Apple Care. In one conversations with the Senior Support Specialist I mentioned this and was told that I can circumvent spending that first hour with a generalist by just asking to talked to a more senior support person right from the start.  That was great information to have and I’ll definitely do that in the future because I usually feel like I know much more about how ios Devices function than the Apple Care people I contact.

Shortly after getting in contact with the Senior Support Specialist, whose name  is Addison, I grew hopeful when he zeroed right in on what seemed to be causing the problem and he immediately knew what to do to fix it!

The Result of My Apple Care Session

I didn’t ask any followup questions about why switching WiFi’s has anything to do with disabling iCloud Photo Sync. I suspect that one of my Readers could probably explain that part to me! But the end result was that he helped me figure out which ios devices weren’t syncing properly by comparing the total number of photos in the camera roll of each. Then we went through the necessary steps to fix the 2 iPads and 2 iPhones which we determined were the ones that weren’t syncing. These also happened to be the devices I use most often and mainly, the ones I’d taken on the recent trip.

You do this in Settings at the very top of the left menus by tapping on your name and then on the right pane scrolling down towards the very bottom until you find the words:

When you do this you’ll receive a message asking if you want the content of you device’s data removed or kept on the device. Addison said it didn’t matter which, but I chose ‘Keep’ because it would be less of a strain on our WiFi system initially when all of the data started to sync again.

Do a Soft or Hard Reset of Your Device

I asked Addison, the Apple support tech, which is the correct terminology…because I’ve seen it both ways…he said there isn’t a standard. I’m talking about the Reset in which you hold down both the Home Button and the Power On/Off Button until an Apple appears on the screen…then let go of both buttons and let it Reset itself.

You do this in the same place in Settings. When you do be prepared for a whole slew of notifications like using WiFi enable calls, merging your iCloud data and other things I forget right now.Basically answer this all if you want or if you don’t want to they can always be revisited later…usually in Settings…sometimes Addison said there would be a red badge alerting you to where there change something.

Wait 24 Hours (Making Sure Your Device is Reconnected to WiFi 1st!)

When 24 hours have elapsed…or the next day, check the total for the main Photos Album. I checked mine early and began using the device so I watched throughout the day as my photos and videos were slowly brought back onto it and my 3 other devices.

This fix worked reliably on all 4 devices!

One pretty drastic, but still viable method to ensure that iCloud sync continues working well on devices is this. Whenever Apple replaces a device for someone, this naturally involves a restore of their data to the new device. It seems this has occurred with me a lot recently. Restoring the data on an ios device has become pretty painless, which means that when an Apple Genius tells me the only way to fix a problem is to restore it…I no longer cringe and put it aside, deciding to buy a new device to hold me over until I get around to it!

A big plus of the restoration process, regardless of whether or not it’s a brand new device or an older one that’s exhibiting the problems…is that a restore almost always fixes all of the photo Sync and other iCloud sync problems too.

The reason I mention this is because if you are contemplating restoring a device anyway…then knowing that the restore will fix your sync problems too (only on that device though) is something that I’d want to know up front.

Some Advantages of Apple Care

I maintain Apple Care on some of my newest, most expensive devices. This, for me has resulted in an overall significant cost savings in the long run because Apple has replaced many, many devices for me over the years. The reason is because ios devices have a fairly closed system which makes it far easier for Apple to provide customers with a brand new device when problems arise. The problems which have resulted in Apple’s replacing a device for me range from a tiny speck of dust under the glass of an iPad Mini 2 (which doesn’t have the recently hyped  laminated Screen and infinitesimal cracks in the screen which I didn’t even notice, to a new Apple Watch which developed battery problems…with a lot in between.

Another way to assure that you are keeping your devices as up-to-date and as new as possible is to occasionally monitor what I call ‘Apple’s recall webpage,’ and discovering if  you have a problem device listed there. Occasionally the ‘remedy’ will be a replacement device…as was the case with the recent iPhone 6S battery recall for me. Naturally your device needs to be exhibiting the problem and sometimes there are criteria your device needs to meet. But if it does it’s well work taking the extra time to check it out because you will end up with a brand new device.

Please leave any comments for me by scrolling down towards the bottom of this page and looking for the comments box.

Hi...I'm the author of 2 main blogs on WordPress...vsatips...where I write tech tips for mobile devices...primarily ios...2nd is vsatrends...where I write less about tech things and more about everything else. I also host a YouTube channel which I use to better illustrate some of the 'how to's' in my posts. I love everything about technology. Currently, my main interests/platforms are ios, Windows and Amazon Echo. Recently I decided we were spending way too much money with our local cable provider. So I decided to cut the cord. There is a definite learning curve, especially the antennae part, but we successfully did that and are now saving a boatload of money, so I write some about that. I also am extremely conscientious about security because of an event my family endured , so I write a lot about that too. Two sub-categories of security I tend to focus on are the password manager Dashlane and Hardware Firewalls. Last, I take a lot of notes and have been a beta tester for Evernote for many years. I love Evernote! In recent years Apple has beefed up Apple Notes a lot...so it’s become a fairly serious note contender...as long as its OK if you lose or mess up all your Apple note data. I write about those 2 note platforms primarily.
View all posts by vsajewel →
This entry was posted in iCloud Photos, iPad, iPhone, Problems Using Apple Devices and tagged iCloud Photos, iCloud Sync, ios 11, ios 11 tips, iPad, iPhone, Photostream Sync Problems. Bookmark the permalink.