Above: So far we love our new HP 7855 Envy. The 7500a it replaced was a disappointment from day one.

Recent changes HP has made to their ios apps have caused a lot of confusion about which app to use as well as introduced a bogus app that’s ripping off tons of HP and Apple customers.

What may be worse is that unless you’re very careful in your app selection you will be shelling out over $150 a year for nothing and you’ll lose basic Apple features like the ability to print or create PDF’s from within Safari.

This article describes how to avoid these unnecessary charges and provides a link to the correct HP App too use. I also show you how to restore the Print command in Safari.

Why the Missing Print Icon is a Big Deal

This is a big problem because I use Apple’s awesome Print to PDF utility all the time. If you’re unfamiliar, that gives you the fastest way to save an entire webpage. I generally save webpages as PDF’s in Apple notes but you can save them anywhere you like.

If you need to learn how to use Apple’s great utility for saving webpages you can read my article which  teaches you how to turn any webpage into a PDF that you can save offline using the Safari Print command.

But I can’t do this without the Print utility!

For Getting the Print Command Back Quickly

Even if you think you’ve done this before…try it again. 90% of the time when I apply this one change the Print Command RETURNS!

This is the fastest way to fix missing print icon

Our HP Quick Start Instructions to set up the new printer had 2 bar codes to scan. I scanned the first one and it trook me to what ended up being a SCAM APP called TAP TO PRINT. This app appears to be an HP app but it’s not. From what I can tell the app’s developer has no connection to HP whatsoever. The fact that I downloaded this app directly from HP’s own printer documentation has not gone unnoticed! It also begs the question…

HP…Why Do You Allow a Scam App on Your QuickStart Printer Guide?

In What Ways is ‘Tap to Print’ a Scam?

Let me count the ways.

It’s unclear to me if HP even knows that they are causing this widespread problem by their including a link to this Tap to Print company who’s clear purpose in life is to rip off customers. Sadly, it’s not just HP that’s involved.

It became obvious to me when reading about the app at the Apple App Store that this app is being marketed to owners of many different brands of printers. You can refer to the screenshot below to see all the printer brands that this scam is targeting.

Below is a screenshot showing what the app looks like in the App Store.

Here’s a link to the app too…but PLEASE BE CAREFUL! Don’t download it or you run the risk of starting the $15.83 per month subscription. I’m providing the link purely for research purposes…not for downloading!

Below is a screenshot showing the webpage you arrive at when you click on the ‘Developer’s Website‘ in the App Store description.

Last, here’s a screenshot of the apps most recent reviews. Close analysis will reveal one or 2 terrible reviews and then 4 or 5 perfect ones. One clue that the perfect ones are bogus is that they are always all written on the exact same day!

“Tap and Print’s developer appears to be from Japan. His name is Fedor Baznat. This only appears to be his 2nd app. But it’s been a highly successful one for him!

Since Tap and Print came out in January he’s made $70,000 in profits*! Not bad for an app that doesn’t work and that stopped being  updated 4 months ago!!!”

Which HP App Should You Use?

There is only one HP App now that serves all of the main functions you used to need several apps for. Needless to say (I hope) is that it’s free (as are all Hp apps!)  If you install this app, the correct app, you won’t ever experience the disappearance of the Apple’s Printer icon! Because it’s the over aggressiveness of the scam app as well as HP’s lesser quality apps that works to block Apple’s stock Print utility.

The app you want is HP Smart by HP. Below is a screenshot of it.

HP Smart replaces HP’s old ePrint & HP All-in-One Printer Remote Apps. Both of these apps have been discontinued however if you owned the ePrint one previously you can still download it.

Don’t make the mistake of confusing that ePrint app with another one which is still available for sale. It’s called HP ePrint Enterprise. The reason you don’t want that one is because of all the horrible reviews AND because if you have it on your devices it blocks Apple’s Print function from appearing!

How to Restore the Print Icon

The easiest ways to do this is to search for any errant or scam Print apps and deleting them. The easiest way to do that is to use your ios devices Spotlight Search Utility. Here’s how:

Simply swipe down from about the middle of any Home screen and you should see something like this:

Then try searching using words that hopefully are familiar to you and your device…like Print or Printer apps or HP into the search bar.

Hopefully any Print Apps you have will be listed below like these:

If there’s an app that’s actually on your device, but it’s hard to find because it’s in a folder you can find the name of the folder using this technique too:

Once you find any offending app just delete it. Don’t worry, you can always reinstall it if need be.

Check Safari Again After Any & All Superfluous Print Apps are Deleted

Here’s what my Safari Share Extension menu looked like before and after I deleted HP’s ePrint Enterprise App today, which ended up being the cause of my problem today. 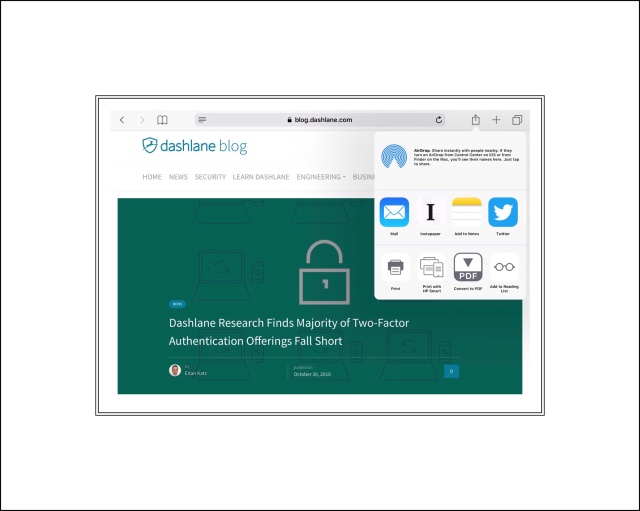 If you’re still having problems finding it, make sure that you scroll all the way to the end of the bottom menu in the Share Extension and tap on the three dots which opens another longer menu of everything that could appear there. Check to make sure that Print isn’t just unchecked or hiding which would prevent it from appearing in the menu…see below.

How to Report an App to the App Store

It’s really easy to report any app to Apple’s App Store. Of course it’s a good idea to leave a lousy review for the app too. But the easiest way to report it to Apple is to use their ‘Report a Problem‘ webpage.

You can use this same reporting feature to ask for  refund if you were taken in by this app the way that I was. You can even go to Apple’s main support page and request that a support person call you and then request a refund in person. I mention this only because it appears several Apple users didn’t get refunded because they didn’t know where to ask for a refund. The phone support option I think works best in this scenario.

You can read about what that means in the following screenshot.

Hi...I'm the author of 2 main blogs on WordPress...vsatips...where I write tech tips for mobile devices...primarily ios...2nd is vsatrends...where I write less about tech things and more about everything else. I also host a YouTube channel which I use to better illustrate some of the 'how to's' in my posts. I love everything about technology. Currently, my main interests/platforms are ios, Windows and Amazon Echo. Recently I decided we were spending way too much money with our local cable provider. So I decided to cut the cord. There is a definite learning curve, especially the antennae part, but we successfully did that and are now saving a boatload of money, so I write some about that. I also am extremely conscientious about security because of an event my family endured , so I write a lot about that too. Two sub-categories of security I tend to focus on are the password manager Dashlane and Hardware Firewalls. Last, I take a lot of notes and have been a beta tester for Evernote for many years. I love Evernote! In recent years Apple has beefed up Apple Notes a lot...so it’s become a fairly serious note contender...as long as its OK if you lose or mess up all your Apple note data. I write about those 2 note platforms primarily.
View all posts by vsajewel →
This entry was posted in Apple, Apple apps, HP Printer, Tech Tips and tagged app scam, Apple app, bogus app, HP scam app, Report Apple app. Bookmark the permalink.