Occasionally I still write articles for HubPages.  HubPages is a really great community of bloggers who share a hosting source (HubPages) as well as tons of knowledge and ideas, all while providing support for each other as people learn all about blogging and possibly even earning income through blogging.  I can wholeheartedly recommend joining a community like HubPages if you’re really interested in learning to blog because there’s a lot to learn at first and HubPages is excellent at making that process fun instead of frustrating.

I looked at both HubPages and Squidoo when I was considering becoming a new blogger.  I’m not 100% certain why I picked Squidoo…but I think it may be because I wanted to learn about earning income too and HubPages required users to upload their personal tax information in order to earn income.  I was highly skeptical of anything online at that point in time and I didn’t want to do that.  Plus that I thought they wanted much more private information than they actually ended up needing.

So I picked Squidoo…and they were great…but when I was forced to switch to HubPages after Squidoo closed down, I realized that I actually preferred HubPages and that I would have been better off picking them instead.  Oh well, live and learn…

If your interested in learning more about HubPages and signing up as a new member in can go here.

My Experince at Squidoo

So, I ended up picking Squidoo.  Another reason why was because I’d run across several articles written by people that had the word Squidoo in their link while I was researching buying an outdoor fountain for our yard.  At first I had no idea what Squidoo even was.  But one day when I had a little time, I looked it up and read some about learning to blog there and more on a whim than anything I setup an account there and began to write my first article.  But I wasn’t serious…and it was more than a year later when I actually did become serious, and when I finally finished that first article.

Squidoo was very good to me.  I was an enthusiastic participant in their classes and my own blog was beginning to build a small following.  It was only towards the very end, when I discovered that they were actually in the process of shutting down, that I seriously considered giving up the community concept and going out entirely on my own.

My complete tenure at Squidoo was perhaps a year and a half long.  But those last few months were really pretty awful.  One good example occurred when I was so elated to have received a prestigious accolade for one article that I’d worked extremely hard on.  Sadly, the following day I received an automated email telling me that the same article was removed completely from Squidoo’s servers for ‘violations‘ although what those violations actually were was never explained…and there was no recourse to republish!

Several disheartening experiences like that occurred.  But then we all were let in on the secret that the powers to be had decided to shut down the site completely.   In hindsight I’m certain that all the problems were because staff was working so hard to build a smooth transition for their large user base to move everyone’s content over to HubPages, and that no one was minding the automated robots.

In the end the transition wasn’t all that smooth either…but they really did try.  No content was lost, so that was a good thing!  Everyone just needed to clean up their ported content a lot and re-upload all of their images which had been compressed so much during the transfer that they were virtually unusable.

Prior to beginning vsatips, I rewrote most of my earlier posts for HubPages…although I left a few really awful ones in a dormant state…most notably my first 2 real articles ever written, (I considered my fountain one a ‘whim’ piece,) which were about how my family’s home computer network was hacked (by a botnet), how we figured out what was happening and then how we learned slowly & painstakingly to fix it.  Someday maybe I’ll rewrite those too…it’s not that they are really terrible, but rather thye’re just good examples of my very early writing before I learned to write better for an online audience (my fountain article was updated and improved upon recently so it’s not a good example.)  But I believe that the main message is still appropriate today.

I really like the HubPages community…its just not something that I feel I need anymore, nor do I have the time for it.  Little did I know that WordPress.com is also very community focused…somehow this fact managed to completely elude me for the first few months while I was setting up my new site. But I did participate in one WordPress University course recently, which was also very community oriented…so this might be another good place for beginning bloggers to learn in a group setting…although I can’t speak from personal experience here.

OK, so that’s a very long explanation of why I have several articles located somewhere else instead of right here on my very own website.  You may also notice that these articles don’t easily fall into either of my preferred general topic areas.  That’s because oftentimes what I wrote about was determined in part by a group activity, an assignment, or some type of challenge.  For example, the My Logitech K800 Keyboard article was also class assignment. 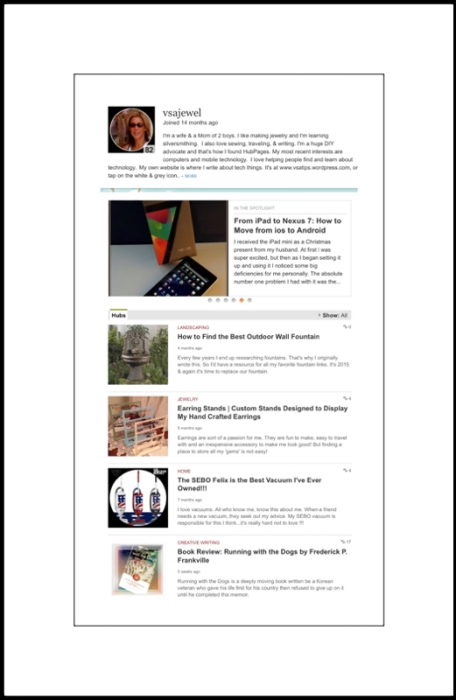 Here are links to some of the individual articles…called Hubs at HubPages:

Making the Transition from an iPad to a Nexus 7 Tablet

The Best Tweezers in the World

Sebo Felix Vacuum is the Best Vacuum I’ve Ever Owned

How to Find the Best Outdoor Wall Fountain