Learning From Our Kid’s…One Good Aspect of Social Media

One More Thing That I Love…is watching as the torch passes to our kids…and our world’s next generation.  As the month of May came to a close, so too did a chapter of life for many new college graduates.  My son, and his friends are included among them.  I was listening to several moving commencement speeches and applauding all the hard work this great group of young adults has already accomplished in their short years on this earth, as I thought about some of my own recent interactions with my sons and their friends.

The young men and women who are now enthusiastically forging their way into and making their mark on the world…do they realize as they’re doing this that the ‘metaphorical torch’ is being passed on to them?

But first one small digression…is it just me who feels like springtime came and went already, and I completely missed it?

When you have kids it seems like springtime is often a season of extremes.  Spring either seems to drag on interminably with it’s so called April showers (I think April-May-June showers is more accurate.)   Or, it’s gone in a flash!  All of a sudden it’s the 4th of July and you wonder…what ever happened to all those elusive May flowers?

Springtime in our backyard before May’s flowers

This was the extreme that I experienced this year. Spring was here and gone before I ever got a chance to take a few breaths and inhale all the new freshness.  But I’m thankful that Summer, not the season, but our new little neighbor…brought some beautiful yellow Buttercups and purple Phlox! 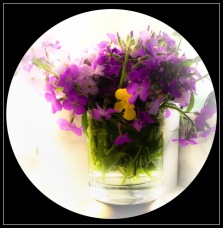 When my kids were younger, things like spring sports and planning out the summer’s activities could take up much of my time in the spring.  As they grew older, that became things like internships and orchestrating experiences that targeted potential occupations (to help them figure out both what they liked and what they might be good at.)

Now my husband and I are entering a new ‘uncharted’ era.  Primarily because this spring has been a ‘graduation spring’ for us (and for many of the parents we know too.)  Along with friends and family members we’re celebrating a lot of high school and college graduations.

The high school ones are colored with a huge sense of relief and thankfulness that everything came off without a hitch. All the tension and worry surrounding college applications and figuring out what one’s life’s goals should be is finally done (at least for a little while.)

I can personally attest to the fact that new college graduates and their parents also experience this overwhelming ‘sense of relief’ feeling quite profoundly too.  But there’s an added sense of excitement too…one quite different from the excitement of moving away from home to attend college.  The thrill of beginning a new live as a real adult with a real job and a real living situation and no future worries of homework deadlines, exams and grades (at least for a little while) is so unique it’s almost palpable.

Hopefully the next phase will be most what parents dream of for their kids (and themselves!) weddings and new babies.  We haven’t experienced all of these phases as parents yet.  However, I’m hoping for, in fact I’m banking on the fact that we will.  And then perhaps, we’ll move beyond the active parenting phases entirely to finally reclaim some springtime for ourselves, and a few more chances to bask in all spring’s glories.

Flowers at the garden center before ours are in bloom

As all these new college graduates move into the real working world, where they’ll get a chance to really begin using so many of the skills they’ve mastered throughout their childhood and education, so much of the ‘who’ that they become is still so closely tied to all those things that they were drawn to, and became passionate about much earlier in their lives. As exciting as it is to watch our kids and their friends grow and mature, it’s even more exciting to realize that as this happens the tables are slowly turning and they are now the ones beginning to teach us a thing or two about life.

All That’s Good About Sharing

Say what you will about the negatives and inherent dangers of social networking. I’m one of the first to acknowledge that there are far too many ill effects. But one thing is abundantly clear to me. Parents today get opportunities to interact and watch kids grow in so many more ways than our parents did.  If we just take the time to, we can learn so much from them. I think it’s really cool that we get this opportunity! 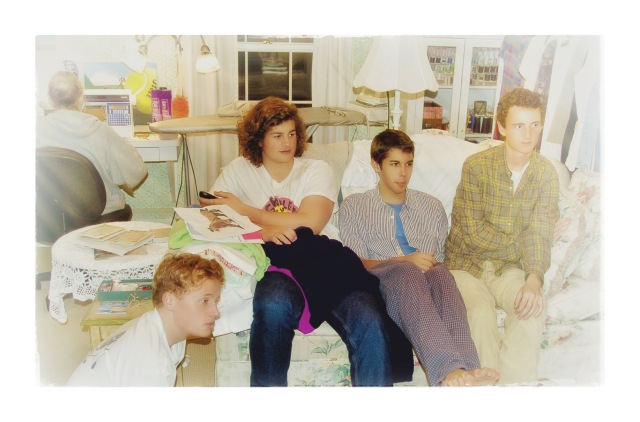 An old photo of our son in high school year with (from left to right): Me in the background sewing or rather ‘helping’ to sew a 3 person horse costume that the boy’s came up with for Halloween one year,  3 bff’s of my son’s. The one on the left, on the floor, earned the dubious distinction of befriending my son when he accidentally chipped his new permanent front tooth…after tossing some pebbles in the air as a 5 year old. My son’s response…”do you have any idea how much it cost my parents to get this tooth to grow in straight?” The boy farthest left on the couch, with the horse costume design, is author of “The Wind Chime Phase”. Next is my son (with the goofy expression on his face.)  Last is another very good friend of Ethan’s who ended up lived with us during his last year of high school because his parents unexpectedly moved to the UK.

I was searching for a friend on Facebook today and ran across something else instead.  It was something a friend of my son’s shared.  He’s just graduated from college and in his last year there he had to navigate a really difficult journey:  coping with his mom’s life threatening medical crisis.  He wrote a beautiful essay he entitled  The Wind Chime Phase, in part as a coping mechanism I think, and in part to bring some beauty and childhood wonder into an otherwise harsh and ugly reality. In the end the news was good, and his mom is well on the road to recovery.

Something that he wrote when he shared his essay on Facebook really struck a chord with me.  He wrote…

As a community we need to encourage constructive openness and a capacity for sharing and listening, any honest exchange. There’s no shame, no weakness in sharing.  If we allow ourselves to do something as small as admit it’s been a tough day when someone asks how we’re doin, or tell them that it’s been a great day, and here’s why, hope and positivity can be affected, a lil empathy cultivated, compassion spread, and everything will be that much more connected and brighter. I want to thank everyone from this past week who sent along their regards, or gave me an extra big hug, or even smiled at me. You might not have known it but you made a big impact.

wind chimes I found at a cool antique store in Florida


That’s the best part of social networks and being a parent I think.  How lucky are we to be the first generation of parents who get to watch our kid’s and their friends takeover our world and make it a better place?  How can we doubt that all the inter-connectedness from platforms like Facebook and Twitter won’t fail to reap positive changes that will really make our world better in our lifetime?

Hi...I'm the author of 2 main blogs on WordPress...vsatips...where I write tech tips for mobile devices...primarily ios...2nd is vsatrends...where I write less about tech things and more about everything else. I also host a YouTube channel which I use to better illustrate some of the 'how to's' in my posts. I love everything about technology. Currently, my main interests/platforms are ios, Windows and Amazon Echo. Recently I decided we were spending way too much money with our local cable provider. So I decided to cut the cord. There is a definite learning curve, especially the antennae part, but we successfully did that and are now saving a boatload of money, so I write some about that. I also am extremely conscientious about security because of an event my family endured , so I write a lot about that too. Two sub-categories of security I tend to focus on are the password manager Dashlane and Hardware Firewalls. Last, I take a lot of notes and have been a beta tester for Evernote for many years. I love Evernote! In recent years Apple has beefed up Apple Notes a lot...so it’s become a fairly serious note contender...as long as its OK if you lose or mess up all your Apple note data. I write about those 2 note platforms primarily.
View all posts by vsajewel →
This entry was posted in Blogging, Recent Blogs |, Things I Love, Websites I Love and tagged college graduation, Facebook sharing, kid wisdom, learning from kids, passing the torch, Social network sharing, springtime. Bookmark the permalink.