A Formula Guaranteed To Frustrate

**If you are using Mac OS, or ios and have the YouTube app installed, scroll to the comments section at the very bottom of this article to see what worked for one person.  It’s really far down and easy to miss…it’s even past the little Bio of me, where it looks like there won’t be any more content related to this topic.

Some things have changed with Google’s account security settings, which impacts ios 8 users in several meaningful ways. The overall impact on ios users results in difficulty connecting their accounts to the apps that rely on Google accounts. I thought that I had covered all of this in a previous article I wrote.  I also thought I had effectively managed my own Google accounts.

But, I never thought about how:  Adding 2 Step Verification to my Google account would impact my ability to upload videos to YouTube using iMovie in ios 8

One of iMovie’s Trailer Themes

I decided to write a separate post specifically for this, because it’s not something that anyone would immediately think about when updating all of their security settings for Google accounts. So the most recent problem I encountered was when I attempted to upload a video using the iMovie app.  I’d previously used iMovie on that iPad to do exactly that.  I’d also addressed the new Google security issues for the YouTube app on the iPad I was using.  In fact, I had signed in previously to both apps and used both apps for this same purpose within the last few days!

That’s why I was more than a little puzzled when YouTube asked me to sign in again prior to uploading a video.  I tried…several times…yet kept the boxes to enter my data just ‘refreshed’ and appeared empty again…awaiting me to enter my sign in data.

But, because there were no error messages of any kind, I assumed I’d just typed my password incorrectly.  But after several more attempts, and then going to look up my password in Dashlane, and actually copying it from my personal password data bank (stored in Dashlane), I pasted it in and tried again (to rule out typos).

The possibility of failure appeared to be inevitable until it suddenly struck me… this was yet another instance of Google’s enhanced security.  iMovie now also required an app password due to my enabling the 2 Step Verification (which Google required me to enable if I wanted to read my Gmail using Apple’s standard email app!)

The more I thought about it I wondered if this wasn’t a direct result of updating to ios 8.1.3?

The reason I think this may be true is because many of the changes that the update is supposed to address are security related. I link to my longer article about all of this below, but these are the basic steps:

See my longer article.  I wrote a lot more about setting up Gmail and Google accounts in ios 8.  In it there are also links to some of the various Google accounts and settings pages to manage your account security, as well as to some Google support articles.

Link to my article:  How To Setup A Gmail Account In the Mail App for ios 8.1 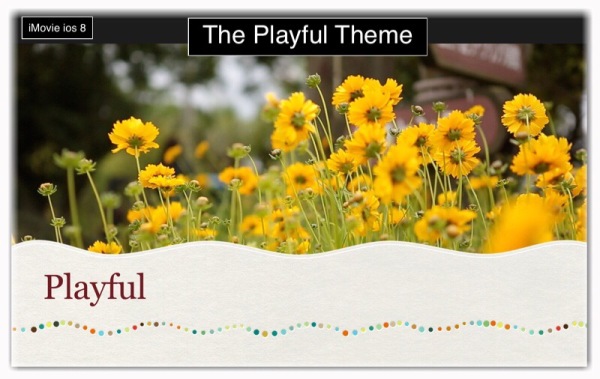 Despite this theme’s name, I wasn’t feeling very playful at this point in time!

If You’ve Tried The Above Steps & Still Can’t Upload a Video Using iMovie, Bypass it Entirely & Upload the Video Using the YouTube app

I wrote a short post on my other website (by accident)…it was supposed to here…telling you how to upload videos using the YouTube app.  You can find those instructions here.  This has become my ‘go to’ method.  I use it all the time because iMovie just ends up taking way too much time to upload from. I just used this method to upload a new video to my channel…the link’s right below here.

My personal rant (which you can & probably should skip)

OK, you’ve ignored my warning so here goes:  There are a few exceptionally ironic events which compelled me to write this post today.  The first is that I just updated to ios 8.1.3 today on my favorite iPad Air 2, (the same iPad that I uploaded the video from).  Immediately after the install finished I found that I could no longer use the ‘Speak Text Out-Loud‘ function that I use so often to listen to articles on a wide assortment of topics as I complete ‘mindnumblingly boring‘ tasks like laundry.

The ‘Speak Text Out-Loud‘ function became altered speed-wise, so that almost everything that was read out loud was so extremely fast that I couldn’t understand it!

It sounded like gibberish.  Of course I knew how to change this setting and naturally I tried to do that.  I also tried out different voices…all in vain.  I tried this same function on different ios devices I use…all with ios 8, but most I’d not installed the latest update on.

The results of my tests were oddly inconclusive.  The speed issue presented itself on several different devices but in different ways, or while using different apps, or with different document types.  Especially with PDFs.  I started to get really confused.  I researched the issue and found only 2 mentions of it in the Apple forums, (both quite recent), so I decided to write a little article about that and create a video example of the sped-up gibberish my iPad is spewing.  But I couldn’t actually upload the video for about an hour.  I finally figured out the problem and went to change that particular Google account’s security settings accordingly.  Then I was finally able to upload the video!

Yay!  A little while later I received a confirmation notification from YouTube that the video was complete and I was asked if I’d like to view it.  Of course I did want to, so I tapped YES and the YouTube app was auto-opened.   But I had been signed out of my account!  (Despite my being logged in an hour earlier)  So I attempted to resignin…repeatedly, but was I was locked out.  I tried generating & using a new app password…but I was told to just to use my regular password…not the app specific one.

When I used my regular password I encountered the exact same scenario described above that I initially saw in iMovie.  The sign-in box just refreshes.  No error messages were shown directing me towards where the problem may lie.  To make matters worse I was automatically signed out of all my Google accounts in the YouTube app.  I’m was completely unable to log into any of my Google accounts on that iPad’s YouTube app.

Talk about frustrating!  Here I am writing help articles for everyone else to follow to log into their own Google accounts on ios 8 and I can’ t even do it myself!  Fast forward to several days later and here’s what actually happened.  I was actually typing the wrong password into the YouTube app.  I inadvertently, repeatedly made one letter UPPERCASE, when in fact it should have been lower case.  I’d also entered it into Dashlane incorrectly…I must have manually changed it in Dashlane at some point.  So that solved the YouTube signin mystery and I can confidently state:

The speed issue was a longer, more complex one than I anticipated.  But in the end I believe that it is specific to reading PDF’s out loud, in EverNote for sure, and quite possibly some other apps too.  But I did figure out 2 workarounds.  The first is to open the PDF in GoodReader.  GoodReader  provides it’s own in-app speed control utility.  So, for now, that’s my best solution.  However I also found a second speech speed setting in ios, deeper in the Accessibility settings.  I’m pretty sure this 2nd speed setting, which is under Accessibility and then Switch Control – Audio, can be tweaked, if given enough time, to fix the fats speech.  You don’t need to enable the Switch Control feature…just tap on it and go to Speech, then adjust the speaking rate there too.

You can leave comments towards the bottom of the page.

Hi...I'm the author of 2 main blogs on WordPress...vsatips...where I write tech tips for mobile devices...primarily ios...2nd is vsatrends...where I write less about tech things and more about everything else. I also host a YouTube channel which I use to better illustrate some of the 'how to's' in my posts. I love everything about technology. Currently, my main interests/platforms are ios, Windows and Amazon Echo. Recently I decided we were spending way too much money with our local cable provider. So I decided to cut the cord. There is a definite learning curve, especially the antennae part, but we successfully did that and are now saving a boatload of money, so I write some about that. I also am extremely conscientious about security because of an event my family endured , so I write a lot about that too. Two sub-categories of security I tend to focus on are the password manager Dashlane and Hardware Firewalls. Last, I take a lot of notes and have been a beta tester for Evernote for many years. I love Evernote! In recent years Apple has beefed up Apple Notes a lot...so it’s become a fairly serious note contender...as long as its OK if you lose or mess up all your Apple note data. I write about those 2 note platforms primarily.
View all posts by vsajewel →
This entry was posted in Apple's New ios 8, Fix A Problem Uploading Videos to YouTube Using iMovie on ios 8, iMovie and tagged 2 Step Verification ios 8 and 8.1, Google accounts, iMovie, ios 8, YouTube. Bookmark the permalink.